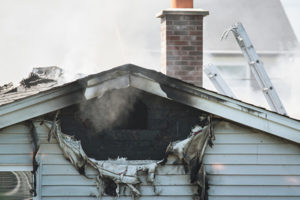 Fires cause damage in a variety of ways, some of which are difficult to detect. Furthermore, efforts to extinguish the fire may cause additional damage. In brief, the fire would cause damage due to heat (like melting metal or plastic), and smoke. Extinguishing the fire typically entails breaking windows or doors to gain access, large amounts of water to stop the flames, foam as well as other fire-fighting toxins; all of which can cause collateral damage, some noticeable, some not.

Here are seven hidden dangers to look out for after a fire.

The heat from a fire could melt plastic sealing around wiring, causing it to break and then damaging the interior of seemingly unharmed electrical appliances, like washing machines, refrigerators, or stoves. Thoroughly check the wiring in a building, which is especially important if water was used to extinguish the fire because electricity and water are a dangerous combination. A damaged appliance or faulty wiring could easily cause another fire because of internal soot deposits; therefore, they need to be examined before re-use.

Heat can damage metal and plastic pipework without being affected directly by flames. Metal pipework can expand and contract when heated and cooled. Therefore, it might appear to be in great condition, but the seals may have become ineffective, potentially resulting in leaks. Smoke could also clog filters as well as clog up hidden parts of any system that draws in air, like a boiler. As such, if a fire has occurred anywhere near the gas system, you must have your system inspected and tested by a professional technician.

Water pipes hidden within the walls remain at risk. Heat, like gas pipes, could melt metal and plastic pipes as well as damage seals, causing leaks. Although a water leak will not end up causing another fire (except if it enters the electrics), it could really cause severe damage to your home if it is not identified quickly.

A lot of people are aware that smoke odors can linger. Particulates will linger with odors and even lead to lung damage due to the ‘thirdhand smoke effect.’ That is especially dangerous for those with a compromised immune system like children and older adults as well as individuals with a pre-existing lung condition such as asthma.

Because putting out a fire can require tons of water to be poured into your premises, you should therefore treat it as if it has been flooded and search for hidden water damage as well. Hidden water damage can cause structural damage, damage to electrical systems and wiring, wall and plaster structure damage, and cause mold growth.

Cleaning up the aftermath of a fire is a difficult process to face alone. Smoke and soot residue can spread throughout the premises, depositing a layer of residue on anything it comes into contact with. To avoid further damage, the soot residue must be cleared as quickly as possible. Contact Restoration 1 of Tuscaloosa right away for thorough fire and smoke damage restoration in Northport.

Restoration 1 of Tuscaloosa is a locally owned and operated franchise that specializes in a wide array of emergency mitigation and restoration services.

We can handle emergency damage promptly, backed by a nationwide supply of both resources and experts available to repair your home or business fast and reliably.

Serving areas in and
around: